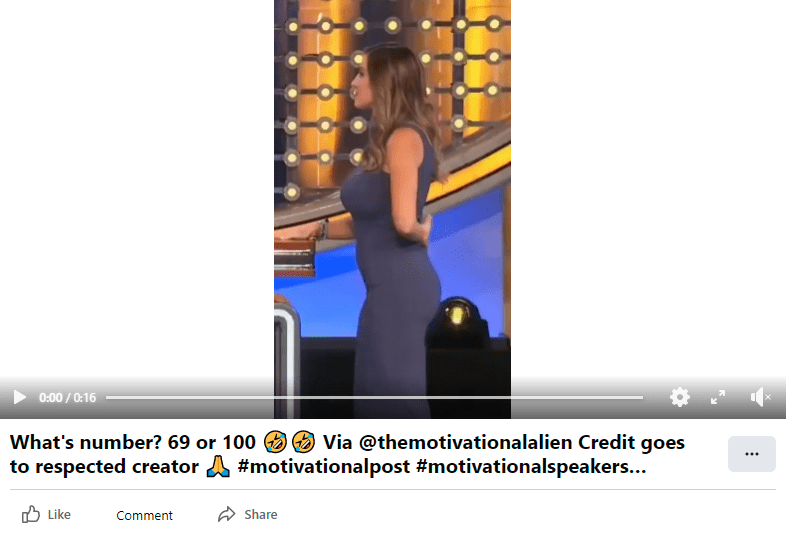 The most viewed post on Facebook last quarter was a 69 joke, featuring reposted footage from an episode of the TV show Family Feud. The post, originally an Instagram Reel, had more than 52 million views on Facebook, according to Meta’s quarterly report on the most widely viewed content on the platform in the US. It was just one of many spammy meme reposts to feature in Meta’s own list of its top content on the platform.

This quarterly report, first launched a year ago, was created in part so that Meta could tell the story it wanted to tell about Facebook: that its users are not bombarded constantly with extreme political content, as researchers and journalists using CrowdTangle, a Meta-owned tool, have found.

But in trying to do so, it has demonstrated something else: the most popular content on Facebook is often awful, recycled generic memes.

It’s not necessarily surprising that reposting already popular memes gets views on Facebook, but “it’s imperative to monitor where the attention garnered by this content is directed” in order to catch attempts to funnel this attention into grifts, extremism, and disinformation,  says Karan Lala, a fellow and the editor in chief at the Integrity Institute, an organization founded by former employees of Facebook’s integrity team to research and advise the public on the inner workings of social media platforms. Lala recently published research into the spam economy on Facebook.

The top 20 posts by views on Facebook in the most recent report are overwhelmingly reposted memes that were originally created for other platforms. A lot of the pages responsible for them belong to Instagram viral content accounts with names like Ideas365 or Factsdailyy. There are two pro–Johnny Depp meme reposts on the list, with nearly 100 million views between them. Two of the 20 top-viewed posts are not listed on the report because Meta removed them for violating its policies on intellectual property or inauthentic behavior.

The main issue here is not necessarily one of safety: the most popular content on Facebook feels more like boomer bait than it does something designed to attract engagement from the younger audiences Meta is courting. But as Lala notes, relatively benign meme accounts and potentially harmful accounts that are posting memes in order to drive attention somewhere specific are difficult to distinguish on the surface.

Ideas365 and Factsdailyy appear similar at first: they are both Instagram meme accounts getting enormous amounts of views on Facebook. They each post about a half-dozen short videos a day. Their content is generic. But looking closer, Lala noted some key differences: Factsdailyy’s bio contains contact information, and each post credits the source of the meme it’s reposting. At a cursory glance, this account is likely just a normal old meme account.

By contrast, Ideas365—the page that posted the Family Feud video at the top of Facebook’s most-viewed list for this quarter—drives traffic to a site selling courses for making money selling things on Amazon. While the account does credit the source of some memes, it’s using the attention those memes grab to advertise questionable services. Its featured stories advertise a “mentorship” program that promises to teach students how to create automated Instagram accounts for profit. “The user behind the account mentions owning over 250 theme pages on Instagram and earning ‘hundreds of thousands a month’ from their phone.  This is also complete with ostentatious videos of the user’s many luxury cars,” Lala added.

There’s nothing inherently wrong with being a spammy meme page, of course. The harm here isn’t that the account is using short-form videos on Meta to get people to sign up for an expensive course, says Lala: “As we approach election season, it is important to note that this attention could be just as easily directed toward disinformation or other harms using similar tactics.” Last year, MIT Technology Review revealed the extent to which global content farms have become adept at using Meta’s own incentive structures to profit directly from popular content, whether that’s memes about a celebrity breakup or misinformation on a divisive issue.

Meta also provides data on the top-viewed external links and domains. In this report, five of the top 20 links were removed for inauthentic behavior (the top link was, of course, to TikTok). And the list of most widely viewed domains—perhaps the part of this report that is designed to most directly counter CrowdTangle’s data—showed a mix of competitors like YouTube and TikTok, mainstream news sites, and GoFundMe.

“We’ve been testing new ways to reduce clickbait, engagement bait, and spam,” Meta said in a blog post accompanying the report. “While we’re seeing improvements from these tests, we will need to continually evaluate and refine our approach given how spam operators try to adapt their tactics to evade our new ways of detecting them.”

Platforms do not need to completely eradicate spam in order to make a meaningful difference on this, and expecting Meta to turn Facebook into a spam-free zone is very unrealistic “given how incentivized and adversarial spam actors are,” Lala said.

“I don’t take issue with the fact that spam content exists on Facebook, but the fact that it consistently makes it into the most viewed content on the platform is a real problem,” he adds.

This is not the first report to feature a sea of spammy posts in the list of the most popular content on Facebook. But it comes as those who use CrowdTangle to track the impact of extremism, misinformation, and polarization on Facebook are figuring out how to do their work in a world without the tool. According to Bloomberg, Meta plans on eventually retiring CrowdTangle but has committed to keeping it around through the 2022 US midterm elections.