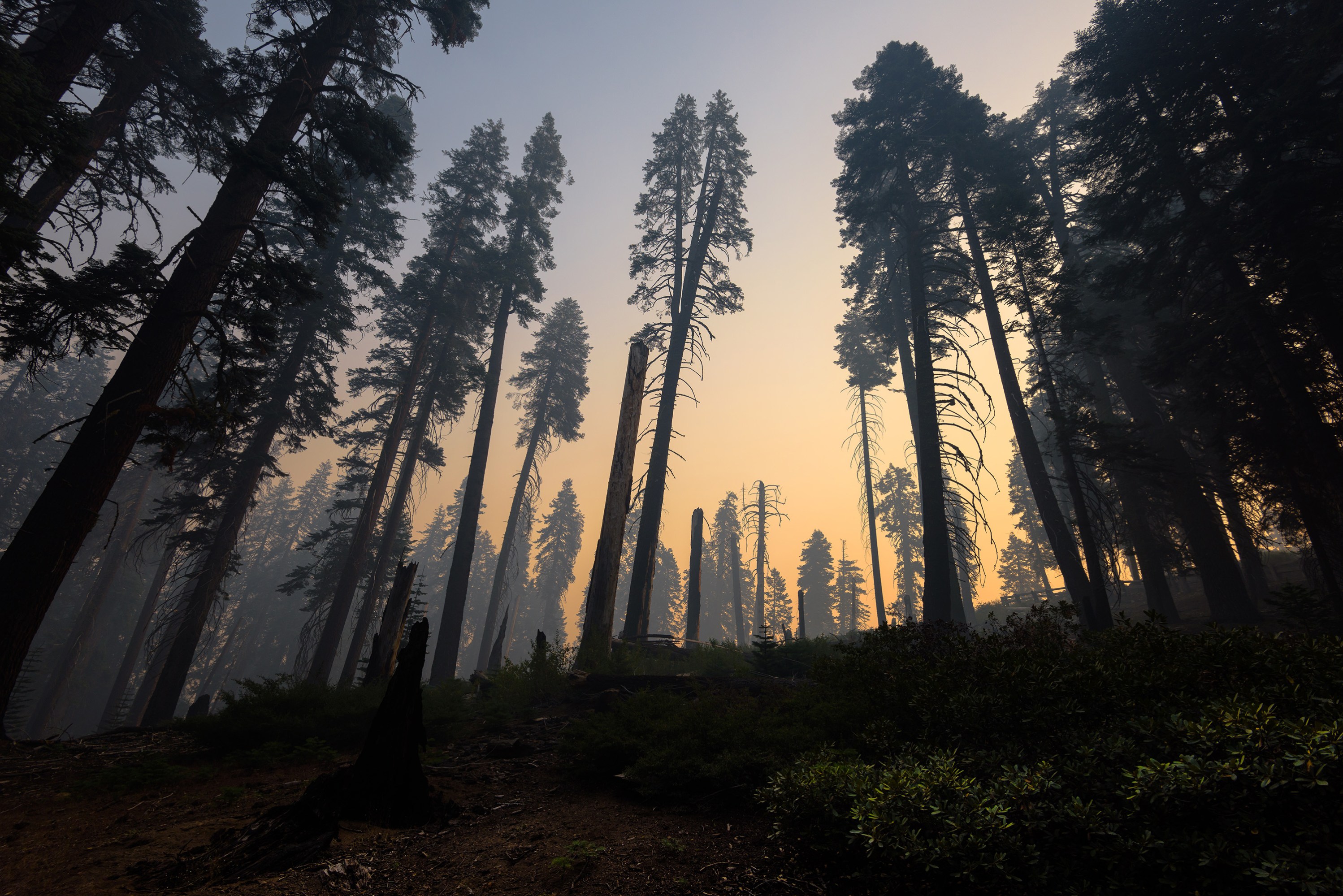 Wildfires raging across the US West Coast have filled the air with enough carbon dioxide to wipe out more than half of the region’s pandemic-driven emissions reductions last year. And that was just in July.

The problem will likely grow worse in the coming decades across large parts of the globe. That means not only will deadly fires exact a rising toll on communities, emergency responders, air quality, human health, and forests, but they will also undermine our limited progress in addressing climate change.

Together, California, Idaho, Oregon, and Washington saw fossil-fuel emissions decline by around 69 million tons of carbon dioxide last year as the pandemic slashed pollution from ground transportation, aviation, and industry, according to data from Carbon Monitor. But from July 1 to July 25, fires in those states produced about 41 million tons of carbon dioxide, based on data provided to MIT Technology Review from the European Commission’s Copernicus Atmosphere Monitoring Service.

That’s far above normal levels for this part of the year and comes on top of the surge of emissions from the massive fires across the American West in 2020. California fires alone produced more than 100 million tons of carbon dioxide last year, which was already enough to more than cancel out the broader region’s annual emissions declines.

“The steady but slow reductions in [greenhouse gases] pale in comparison to those from wildfire,” says Oriana Chegwidden, a climate scientist at CarbonPlan.

Massive wildfires burning across millions of acres in Siberia are also clogging the skies across eastern Russia and releasing tens of millions of tons of emissions, Copernicus reported earlier this month.

Fires and forest emissions are only expected to increase across many regions of the world as climate change accelerates in the coming decades, creating the hot and often dry conditions that turn trees and plants into tinder.

Fire risk—defined as the chance that an area will experience a moderate- to high-severity fire in any given year—could quadruple across the US by 2090, even under scenarios where emissions decline significantly in the coming decades, according to a recent study by researchers at the University of Utah and CarbonPlan. With unchecked emissions, US fire risk could be 14 times higher near the end of the century.

Emissions from fires are “already bad and only going to get worse,” says Chegwidden, one of the study’s lead authors.

Over longer periods, the emissions and climate impacts of increasing wildfires will depend on how rapidly forests grow back and draw carbon back down—or whether they do at all. That, in turn, depends on the dominant trees, the severity of the fires, and how much local climate conditions have changed since that forest took root.

While working toward her doctorate in the early 2010s, Camille Stevens-Rumann spent summer and spring months trekking through alpine forests in Idaho’s Frank Church–River of No Return Wilderness, studying the aftermath of fires.

She noted where and when conifer forests began to return, where they didn’t, and where opportunistic invasive species like cheatgrass took over the landscape.

In a 2018 study in Ecology Letters, she and her coauthors concluded that trees that burned down across the Rocky Mountains have had far more trouble growing back this century, as the region has grown hotter and drier, than during the end of the last one. Dry conifer forests that had already teetered on the edge of survivable conditions were far more likely to simply convert to grass and shrublands, which generally absorb and store much less carbon.

This can be healthy up to a point, creating fire breaks that reduce the damage of future fires, says Stevens-Rumann, an assistant professor of forest and rangeland stewardship at Colorado State University. It can also help to make up a bit for the US’s history of aggressively putting out fires, which has allowed fuel to build up in many forests, also increasing the odds of major blazes when they do ignite.

But their findings are “very ominous” given the massive fires we’re already seeing and the projections for increasingly hot, dry conditions across the American West, she says.

Other studies have noted that these pressures could begin to fundamentally transform western US forests in the coming decades, damaging or destroying sources of biodiversity, water, wildlife habitat, and carbon storage.

Fires, droughts, insect infestations, and shifting climate conditions will convert major parts of California’s forests into shrublands, according to a modeling study published in AGU Advances last week. Tree losses could be particularly steep in the dense Douglas fir and coastal redwood forests along the Northern California coast and in the foothills of the Sierra Nevada range.

All told, the state will lose around 9% of the carbon stored in trees and plants aboveground by the end of this century under a scenario in which we stabilize emissions this century, and more than 16% in a future world where they continue to rise.

Among other impacts, that will clearly complicate the state’s reliance on its lands to capture and store carbon through its forestry offsets program and other climate efforts, the study notes. California is striving to become carbon neutral by 2045.

Meanwhile, medium- to high-emissions scenarios create “a real likelihood of Yellowstone’s forests being converted to non-forest vegetation during the mid-21st century,” because increasingly common and large fires would make it more and more difficult for trees to grow back, a 2011 study in Proceedings of the National Academy of Sciences concluded.

Fires contribute directly to climate change by releasing emissions from trees as well as the rich carbon stored in soils and peatlands. They can also produce black carbon that may eventually settle on glaciers and ice sheets, where it absorbs heat. That accelerates the loss of ice and the rise of ocean levels.

But fires can drive negative climate feedback as well. The smoke from Western wildfires that reached the East Coast in recent days, while terrible for human health, carries aerosols that reflect some level of heat back into space. Similarly, fires in boreal forests in Canada, Alaska, and Russia can open up space for snow that’s far more reflective than the forests they replaced, offsetting the heating effect of the emissions released.

Different parts of the globe are also pushing and pulling in different ways.

Climate change is making wildfires worse in most forested areas of the globe, says James Randerson, a professor of earth system science at the University of California, Irvine, and a coauthor of the AGU paper.

But the total area burned by fires worldwide is actually going down, primarily thanks to decreases across the savannas and grasslands of the tropics. Among other factors, sprawling farms and roads are fragmenting the landscape in developing parts of Africa, Asia, and South America, acting as breaks for these fires. Meanwhile, growing herds of livestock are gobbling up fuels.

Overall, global emissions from fires stand at about a fifth the levels from fossil fuels, though they’re not rising sharply as yet. But total emissions from forests have clearly been climbing when you include fires, deforestation and logging. They’ve grown from less than 5 billion tons in 2001 to more than 10 billion in 2019, according to a Nature Climate Change paper in January.

As warming continues in the decades ahead, climate change itself will affect different areas in different ways. While many regions will become hotter, drier, and more susceptible to wildfires, some cooler parts of the globe will become more hospitable to forest growth, like the high reaches of tall mountains and parts of the Arctic tundra, Randerson says.

Global warming could also reach a point where it actually starts to reduce certain risks as well. If Yellowstone, California’s Sierra Nevada, and other areas lose big portions of their forests, as studies have suggested, fires in those areas could begin to tick back down toward the end of the century. That’s because there’ll simply be less, or less flammable, fuel to burn.

Worldwide fire levels in the future will ultimately depend both on the rate of climate change as well as human activity, which is the main source of ignitions, says Doug Morton, chief of the biospheric sciences laboratory at NASA’s Goddard Space Flight Center.

The good news is that means we do have some control over these forces.

Nations can step up efforts to cut greenhouse-gas emissions as quickly as possible. They can get more serious about halting clearcutting, slash-and-burn agriculture, and other forms of deforestation while promoting tree-planting campaigns. And governments can directly address fire dangers through better forest management practices, including using chainsaws, bulldozers, and prescribed burns to add fire breaks and remove fuel.

Matthew Hurteau, a professor of biology at the University of New Mexico, was the lead author of a 2019 Nature paper that found climate change and fires could dramatically transform the Sierra Nevada under high-emissions scenarios.

Asked what that might mean for treasured areas of the range like the Yosemite, Sequoia, and Kings Canyon national parks, Hurteau said it will depend largely on how rapidly we cut emissions and how aggressively we manage our fire risks.

Update: This story was updated to correct the statement from NASA’s Doug Morton.